Skip to Content
Home Page Hot off the press Can we talk? Can We Talk About Full House?

Kevin Leave a Comment on Can We Talk About Full House?

As a kid, I remember seeing a few episodes of Full House during its’ original run. My mom hated that show, so it was rarely on when we were home long enough to catch it. I remember seeing ads for it all over the place, and for some weird af reason, even an ad on the milk cartons at school, haha. (Side note, ads on milk cartons have been a thing since the 1980s with the missing children, but took off in other directions throughout the 1990s).

Full House basically became a franchise unto itself, with books and novelizations of the show. While I was unpacking my books and loading ’em onto my shelf during the move, I found a copy of one of the Full House books. I only had one, for reasons I don’t know, or even remember.

The show ended its’ run in 1995. However, the reruns aired on various cable channels in the years that followed. Since we didn’t have cable, I never saw them again.

Until a new channel, the WB, came to our broadcast market during my freshman year of high school, that is. Now known as the CW, this channel aired reruns of Full House, and then Roseanne. I never missed a single episode. In order to relive the good times, I found some old videos neither me or my mom cared about in forever, and I recorded my old-new shows over them. I still have them in a box in the basement, and I’ve got access to a way to transfer them from the old VHS tapes.

I’ll have to do that sometime. I think I’ve got enough room on the flash drive I have for my stories for at least half of them. If not, then I guess I’ll be hitting up the office supply store next time I’m in the area.

For me, Full House became part of the inspiration for a story I was writing at the time, both on paper and in my head. The main character in my story was the same age as D.J., and I mentally took notes throughout the episodes for new ideas.

It also became sort of a brief emotional vacation for me. School sucked, and I had come out of a really difficult time in my life, and spending time with Danny, Uncle Joey, Uncle Jesse, D.J., Kimmy, Stephanie, and Michelle was a way to pass the time for me.

Speaking of Kimmy, I thought she was just the coolest, weird as she could be. Tbh, her prom dress rocked, with the battery pack. Not gonna lie, I’d totally wear that, even in 2022. 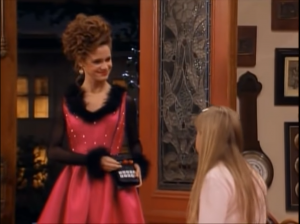 Several years back, there were talks of a Full House reboot, and in 2016, Fuller House came to Netflix. I never saw it, and I have no plans to change that. I guess it’s because I want the show to stay the same as it did in its’ heyday. I also don’t have Netflix anymore, and haven’t for years, haha. Almost everyone except the Olsen twins was on board for the reboot.

Fuller House ended its’ run last year, in 2021. Last weekend, Bob Saget was doing a comedy show in Jacksonville on Saturday. Yesterday, there was an unexpected tragic turn of events. The hotel security found him unresponsive in his hotel room, and according to this post, first responders indicate that he died at the scene. I loved America’s Funniest Home Videos during his tenure as host, and he was a big part of my life as a ’90s kid who didn’t have cable.

I may do a separate post about AFV. Yay or nay, readers? Lemme know in the comments, and I’ll add it to the list if it’s a yay.

According to Bob Saget’s website, he had a whole comedy tour lined up for this year. His next stop was going to be in West Palm Beach at the end of the month. His last Instagram post was on the 8th, making it all the more heartbreaking knowing he died less than a day after he took that selfie.

I learned of his passing when I was watching a livestream of something else on YouTube, like maybe within a couple hours after the news broke. As of the date of this posting, authorities haven’t released an official cause of death. However, they have ruled out foul play and drug use as contributors and the direct cause. I will update this as more information becomes available.

But for now, let’s observe a moment of silence. Rest in peace, Bob. Many thanks for the memories!

I'm a 30-something Millennial woman currently embarking on a new career direction. I graduated from college several years ago, but I'm always open to learning new things. When I'm not in work mode, I love writing, reading, watching YouTube videos, and going out and about. R&B and country music are my life. I'm passionate about writing, self-care, candles, fashion, and beauty. Not always in this order, though.
Oh, and by the way, I did a thing.

To my Aboriginal and Torres Strait Islander visitors, I want you to know that this blog contains content, including video and audio recordings, as well as imagery and discussions of individuals who have passed on.

In the market for a new cell phone case? I gotcha covered. Check out Kasy Case for all your phone needs today!