We’ve all heard about scams, like the ones operating from overseas call centers, or the ones operating out of certain countries claiming the recipient has an inheritance from some dead rando they don’t know from Adam. The scammers will then ask us to send them money, either wrapped in tin foil or hidden in some book and mailed to them personally, or sent to someone else they’ve designated as their money mule, who will then send the money to their actual location.

It’s really sick stuff, and if you’re new here, scams are an issue that hit close to home for me in more ways than one. If you’ve been around here for awhile, you know how passionate I am about the issue of scams.

But there’s a scam that’s relatively new compared to the tech support scams, Social Security scams, or the 419 scams that have been going on for many years. This is the Digital Millennium Copyright Act scam, or the copyright infringement scam. This website talks more in depth about it, and so does this one.

Ok, so you’re working hard on building your own website or online business, whatever. You’re busy creating the content, sometimes to the point where you’re pulling multiple all-nighters in a row in order to do it. (True story, btw.) Your readership is either growing fast, nonexistent, or so few and far between that you don’t feel like it’s worth writing home about.

Wherever you’re at with your website, every day, you check your site’s email. One day, out of nowhere, you get something like this: 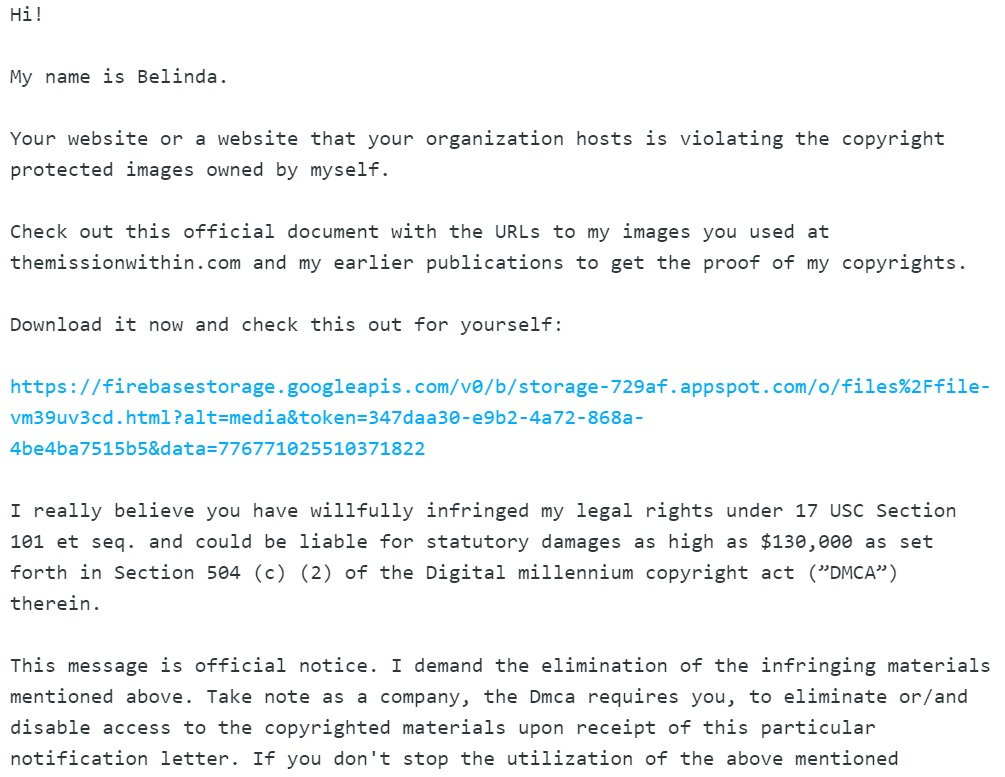 Or maybe a version with some slight improvements, like so: 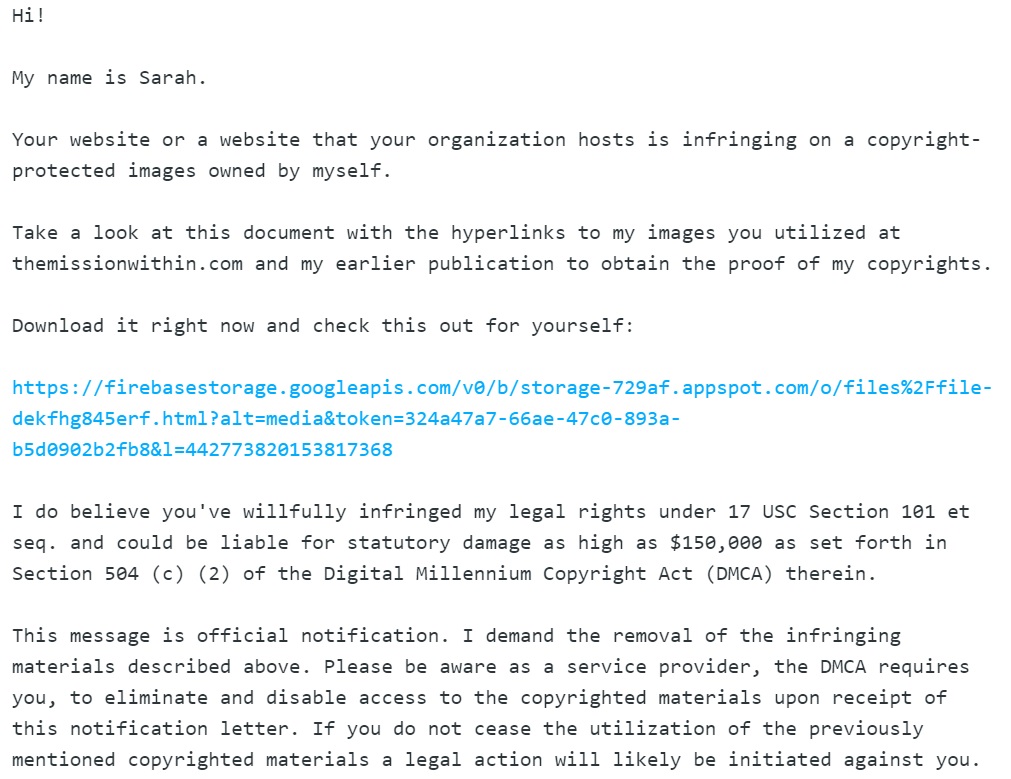 Well, “Belinda” and “Sarah,” were you the ones who took the pictures of the peanut butter, the spinach (or spinachk, as Popeye calls it), and the cereal boxes at the store? Were you the ones experimenting with graphics and all that on Canva, or editing photos of your new house and old house in BeFunky?

Were you also the ones who took the screenshot from an episode on Escape to the Country on the Dabl network?

Did you also somehow travel back in time to take the pic of the Titanic on its’ maiden voyage? (If you did, I’m totally open to hearing all about it!) BTW, that pic of the Titanic is in the public domain, along with this pic of former president Barack Obama.

You, “Sarah,” and “Belinda” and your ilk, however, are fuckin’ dolts. Nice try slinging that legal jargon around. It’s clear you two don’t know shyt from Shinola about copyright law (or law in general), and just copy and pasted whatever you thought would sound the scariest in the hopes of finding someone who doesn’t know any better to click those stupid links.

Furthermore, beliefs and facts aren’t always one and the same. You two turds may “really believe,” have “a strong belief,” or “strong self-belief” that I’ve stolen your property, and you two are more than welcome to believe it. It doesn’t make it true, though.

Last but not least, this message is official notification: “Sarah,” “Belinda,” and your ilk who scare hard-working people with these nonsensical emails out of nowhere, I demand you all go to hell and fuck yourselves. And get a hobby while you’re at it.

Anyways, I couldn’t resist roasting these two dipshits. But in any case, messages like these can be super scary to someone who may not know about blogging, website ownership, or copyright ins and outs, or to someone who has used copyrighted images without crediting whoever took them, and didn’t realize that’s a no-no.

Even I did a double-take when I saw these in my inbox. I totally get it.

So what can you do if you get an email from someone claiming ownership of pics and graphics you created, ownership of public domain or Creative Commons works, and is now threatening legal action against you if you don’t click their link? The Comparitech website linked above says to do nothing about it.

But what if you’ve been using copyrighted imagery on your site without crediting the originator? Not cool, but you still have some recourse, and you can still ignore them. Just take down the copyrighted stuff and swap it out for your own work instead. However, if you have your heart set on the copyrighted stuff, reach out to the originator and ask for their permission to use it. The Comparitech article says that this will be more than enough for any legit copyright holder.

Whatever the scenario, there’s one thing you should never, and I mean NEVER do: click on any links they provide in their message, no matter how tempting it is. A real copyright holder will list specifics in the message itself, and if they’ve got any sense, they won’t resort to threats in their message the way scammers do. The Comparitech article says that whatever is in the link is probably phishing, or worse, malware. Not worth it at all.

I guarantee you, whatever the sender of the DMCA scam message sent you included in their link, it’s not worth risking your computer to find out. It’s probably stupid crap in it anyway that has nothing to do with whatever they’re claiming is theirs.

That being said, messages like this from someone are scary. I get the fear they bring up for their recipients. That’s ultimately why these scams are successful. If they weren’t successful with at least one person, they wouldn’t bother wasting their time.

If you got a message like this, remember that these turds send out dozens of these a day, probably hundreds. You’re likely one of who knows how many they’ve sent that message to. Ignore their message, block them, and move on with your day.

On the other hand, if you have clicked on their links, or engaged with them in any way, end all communication with them, yesterday. Run whatever anti-virus program you have, and as an extra measure of security, take the computer you used when you clicked their link to a computer repair shop and tell them what happened. They’ve seen this before, so you won’t be the first, and unfortunately, not the last.

More importantly, don’t beat yourself up over it. You didn’t know scams like this were a thing, and unless you’re clairvoyant, you couldn’t have seen it coming. If you got an email address or a phone number for them, you could consider sending it my way? Just an idea.

Over to you, readers. Have you ever gotten scam emails like this, or something equally scary? Did this happen to someone you know? How did you (or they) respond? Sound off below, and let’s talk.

I'm a 30-something Millennial woman currently serving as a contractor and sort-of ghostwriter for a company out of state. I graduated from college several years ago, but I'm always open to learning new things. When I'm not in work mode, I love writing, reading, watching YouTube videos, and going out and about. R&B and country music are my life. I'm passionate about writing, self-care, candles, fashion, and beauty. Not always in this order, though.
Oh, and by the way, I did a thing.

Got something coming up, and need a new outfit, like, pronto, that won’t break the bank? Look no further! Also available on both iOS and Android.

For some allergy-friendly, gluten-free fun for your cookie jar, give FOMO Baking Co. a try. Orders over $30 get free shipping!

In the market for a new cell phone case? I gotcha covered. Kasy Case has a 20% off Spring deal!