[Full disclosure: Normally this would be where I would mention that I received this item for free in exchange for an honest review per FTC guidelines. In this case, I paid for this product with my own money. There was no compensation from the company or any other agency, but it definitely would’ve been welcomed.]

If you’re anything like me, you may have seen people around town with wireless headphones in recent years, and told yourself, ‘someday if I can ever afford ’em, I’m totally gonna get me a pair of those.’ I’d seen wireless headphones in the stores, and when they first came out, some of the models and brands cost more than the rent at my old house.

In recent years, the technology’s improved and has become more accessible to more market demographics.

One example would have to be the Skullcandy Crusher Wireless headphones, the topic of today’s review. I remembered seeing them several years back, and wrote them off altogether on account of the price point, and my history with Skullcandy products being not-so great.

I’ll elaborate more on that. In the past, I’d get the Skullcandy Ink’d earbuds from either Target or Wally World, picking different colors as a way to change things up, but going for the pink more often than not in order to match my old 5th generation iPod Nano.

It now holds a charge for like 10 seconds before it dies on me, rest its’ weary soul.

Anyway, I’d take the earbuds out of the package (very carefully!), plug ’em into my computer or my iPod, and within a month, they’d start crapping out on me. Meaning, the sound would be wonky, tinny, or straight up nonexistent. That’s if I was lucky.

Other pairs only lasted me a week before this happened, and I babied the dickens out of them all.

After the one that lasted me a week, I wrote off Skullcandy once and for all.

I remember how they had the Aviator headphones, and even though I wanted the ones in brown, I couldn’t help but wonder if the quality of the Ink’d earbuds was the same as what’s for the Aviators. In that case, there was no way I’d be blowing a hundred bucks on something that would die on me within days.

I explored other brands, and found one I like for earbuds. That’s a story for another time, if anyone wants to hear it.

Then I saw the display at Wally World for the Skullcandy Crusher Wireless headphones. I felt like it’s good to try before you buy. This way, if they were like the earbuds, I could keep it moving in my search for some actual headphones.

I turned up the demo display after putting them on, slightly tilted forward on account of my hair, and gave it a shot. I played around with the volume, and so far, I was liking what I was seeing with these.

I put them down, grabbed my things, and moved on to the arts and crafts department for some cheapie pieces of felt for the skirt I made that you may have seen me posting about over on the ‘gram.

I didn’t have the money for the headphones, but they were definitely on my list after seeing the reviews for them Some were understandably critical, but most were positive (and clearly from different posters, btw).

A few weeks later, I went back to Wally World, and picked up a pair. I got the ones in white as my way of being a bit extra, lol. I paid for them in the electronics department since we can’t take them to the front registers, and stuffed the box into my gym bag.

I lost track of time, which is super-easy to do there and at Tarjay, and I just barely made it to the bus stop in time. I spent the whole way home excited to try them, and when I got home, it was into my room they went, and it was time to unbox ’em. 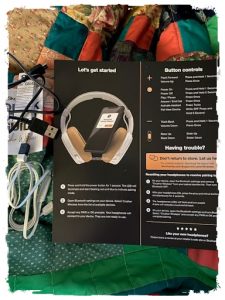 I opened the box, and saw that they’d packaged ’em very carefully. I took out the plastic tray, released the small charging cord and the headphone jack cord from its’ place in the tray, and chucked it into my pile for the recycling bin.

‘If these things turn out to suck donkey balls the way the Ink’d earbuds did, they’d better have a return option,’ I thought. I looked at the papers that came with it, and they instructed us to return any products to them instead of the store.

‘Nice to see they’ve got my back if something goes sideways with these,’ I thought. I charged them up on my computer, and waited for the light to turn green. It took a bit longer than it probably would have otherwise, since they were new.

When that green light came on, it was showtime.

I pulled up my YouTube playlist, and tried them out with them. Then I tried some classical music, some hip-hop, R&B, oldies, heavy metal, and rock.

I’m sure you’ve probably seen and heard (sometimes even felt) cars coming down the street with the music cranked up with a super-powerful subwoofer in the trunk. You know, the kind that rattles the car windows, rattles the wall hangings on a house, and the kind you can feel like a block away.

That’s the level of the bass these headphones are capable of cranking out. If that’s overkill for you in the bass department, there’s a way to adjust that to your preferences. It’s the little slider on the back of the left earpiece.

However, if you’ve ever wondered what the Vienna Philharmonic Orchestra would sound like in one of those super-loud car stereo systems with the subwoofers powerful enough to break windows, then here’s your chance. I’m dead serious. Turn the bass boost on those headphones to the max, and I guarantee you, the results will be unreal.

My stereo already turns Merle Haggard into bass-boosted party tunes. These do it even more with the Merle Haggard album I picked up from a secondhand music shop at the mall. After some fiddling around with the headphone extension I picked up from Guitar Center, we were off to the races. Now I could crank it up without bothering anyone else, or having the neighbors call the cops due to the noise.

I had some day job stuff to do, so I picked out some albums, like so, and worked on that for the night.

All that to say, I’m so glad I had it within me to give Skullcandy another chance. I’d say these were worth every penny. 10 out of 10. Two thumbs up in the style of Siskel and Ebert (‘member them? Pepperidge Farm remembers.). If (not when, IF) I ever get the money, I’ll be giving these out as presents.

But you don’t have to take my word for it, in the words of Levar Burton. Over to you, readers. Have you tried any of Skullcandy’s products before? Were they hit or miss from you? Have you tried the Crusher Wireless headphones? Do you own a pair? If so, what colorway did you get? How are you liking (or not liking) them so far? I’d love to hear your thoughts and takeaways. Sound off below, and let’s talk.

I'm a 30-something Millennial woman currently serving as a contractor and sort-of ghostwriter for a company out of state. I graduated from college several years ago, but I'm always open to learning new things. When I'm not in work mode, I love writing, reading, watching YouTube videos, and going out and about. R&B and country music are my life. I'm passionate about writing, self-care, candles, fashion, and beauty. Not always in this order, though.
Oh, and by the way, I did a thing.

Got something coming up, and need a new outfit, like, pronto, that won’t break the bank? Look no further! Also available on both iOS and Android.

For some allergy-friendly, gluten-free fun for your cookie jar, give FOMO Baking Co. a try. Orders over $30 get free shipping!

In the market for a new cell phone case? I gotcha covered. Kasy Case has a 20% off Spring deal!